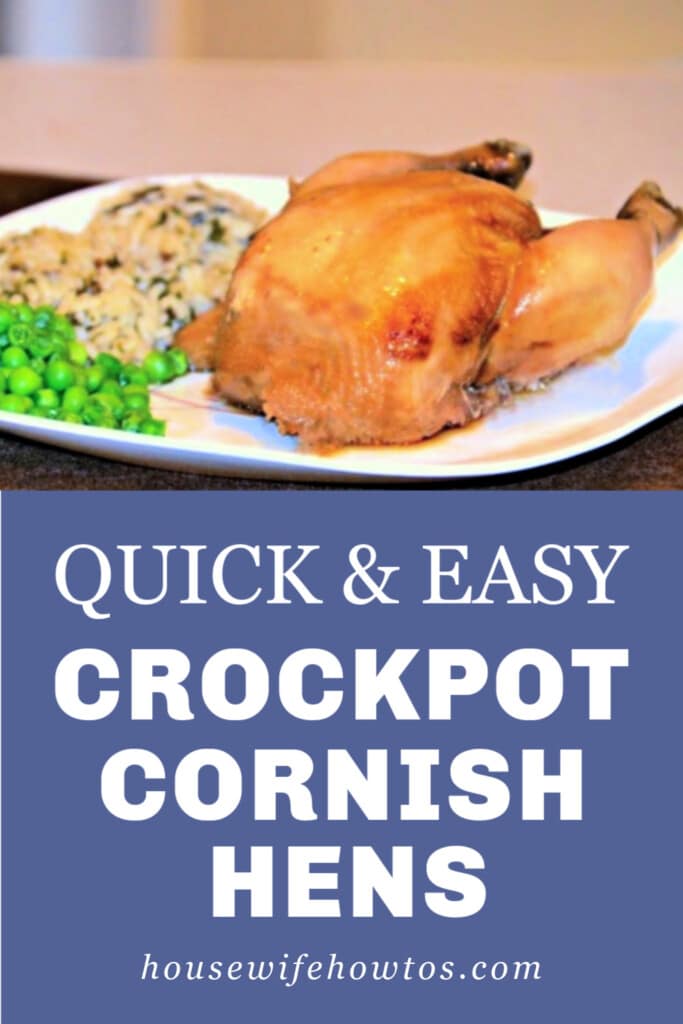 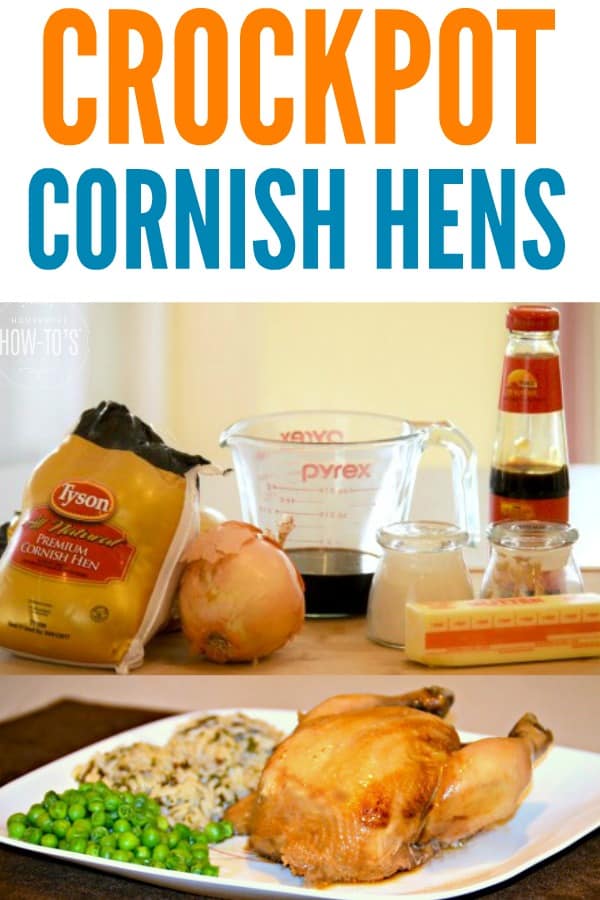 Crockpot Cornish Hens are a dinner obsession in my home. My teenage son (an eating machine) loves them because he gets a whole one for himself. I love them because they’re so easy to make. You just need a handful of ingredients and 20 minutes to marinate them.

Cornish Hens are a specific breed of chicken specially bred in England. Cross-breeding helped them thrive in the mild yet rainy environment. What we buy in US-based grocery stores are labeled “Cornish Game Hens.”

But they aren’t necessarily hens. In fact, Cornish Game Hens are quite often male and are never true game birds.

The labeling quirks don’t end there. See, they aren’t always related to Cornish chickens, either. Due to USDA guidelines, any chicken of any breed or gender can be a “Cornish Game Hen.” It just has to weigh between 1 and 2 pounds and be younger than five weeks old.

Stock Up When They’re On Sale

You may have noticed that Cornish Game Hens cost more per pound than regular chicken. But the’s one time of the year when you’ll find fantastic bargains.

Around the holidays, stores stock up on them for those who prefer not to make a full-sized turkey. So, look for great markdowns on frozen Cornish Hens after New Year’s. They’ll reach an annual low after Valentine’s Day. Cornish Hens keep up to a year in the freezer, so stock up when you find a good sale!

How to Cook Cornish Hens in a Crockpot

Remembering to defrost is the only hard part about this Crockpot Cornish Hens recipe. There’s some debate about the safety of using a slow-cooker with frozen poultry. Some manufacturers say it’s okay. The USDA says it’s not.

The real problem with cooking frozen poultry in a slow-cooker is that it takes longer to reach a safe internal temperature of 165°. Starting this Crockpot Cornish Hens recipe with frozen birds can make them turn out dry or tough.

So, if you forget to defrost them in the refrigerator, don’t give up hope. YOu can quickly defrost poultry — or any meat — in a cold water bath. Here’s a video explaining how.

Give them a Quick Marinade

Start marinating them right after they come out of the freezer. Or dump the marinade into a bag, add the birds, and let it sit for 20 to 30 minutes. This marinade isn’t acidic, so you don’t need to worry about it breaking down the meat. Instead, it’s purpose is to add a rich flavoring throughout.

Prop them Up in the Crockpot

For evenly-cooked birds, keep them off the bottom of the crockpot. Sticking them in the slow cooker without propping them up an inch or so will let their undersides get mushy.

To prop them up, line the bottom of your slow-cooker with four onion halves, two per Cornish Hen. (A reader says that potato halves work great, too.) If you’re not a fan of onions or potatoes, crumpled balls of aluminum foil work well, also.

Once the birds are in the crockpot, pour any marinade left in the bag over them. Cook them on LOW for 8 hours or HIGH for 4 hours. That’s all there is to it. Thanks to the marinade, your Cornish Hens are perfectly seasoned, tender, and still juicy. Weeknight dinners don’t get much easier than this!

Many readers have asked if they need to adjust cooking times to make only one Crockpot Cornish Hen. Halving a slow-cooker recipe can be tricky. These devices work best when two-thirds to three-quarters full.

Or, just make the full recipe and freeze half for later. It’s always nice to have a freezer stocked with healthy, heat-and-eat homemade meals.

With a teenage boy in the house, I rarely have leftover Crockpot Cornish Hens. They’re simple to reheat, though.

Nutritional values reflect the combination of ALL ingredients, including the marinade. You probably won’t be drinking the marinade from the crockpot, though.

I am a participant in the Amazon Services LLC Associates Program, an affiliate advertising program designed to provide a means for sites to earn advertising fees by advertising and linking to Amazon.com. As an Amazon Associate, I earn from qualifying purchases.