If you’re looking to reduce commercially-processed foods from your family’s diet, this Homemade Ketchup Recipe is an excellent place to start

Lately, I’ve made a concerted effort to ditch processed foods but, as much as I hate to admit it, I’ve only recently looked into making condiments from scratch. (I blame my well-stocked pantry for that!) It turns out, I probably should have started with DIY sauces, because the ingredients in the store-bought stuff are nasty.

These days, most commercial ketchup includes not just high-fructose corn syrup (HFCS) but regular corn-syrup, along with the mysterious “natural flavoring” — a phrase that’s so sketchy that people with food allergies should be wary. “Natural flavoring” could include known allergens like dairy, eggs, and seafood.

As for HFCS, the debate rages on, but even the Mayo Clinic acknowledges the controversy over whether the body handles it differently than table sugar. We do know that table sugar contributes to a variety of severe health problems. That’s why many of us are trying to reduce our consumption of it.

Still, we Americans love our ketchup: it’s found in 97% of our homes and considered an all-American condiment, even though its origins aren’t American at all!

According to one food expert, ketchup can be traced back through China to Southeast Asia. Think about that next time you slather it on your French fries! 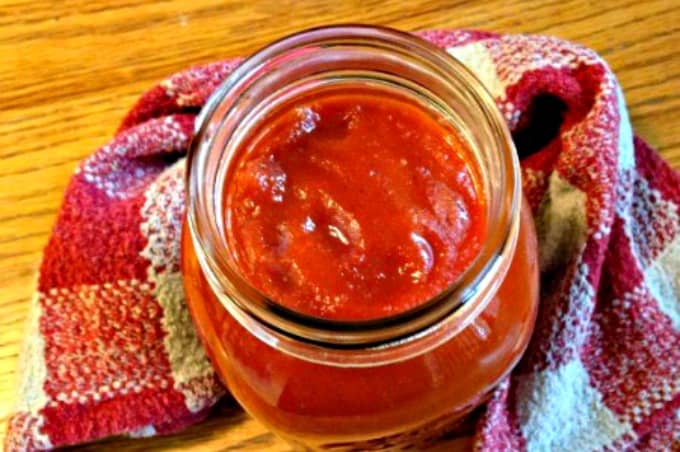 Using fresh tomatoes: You can make this homemade ketchup recipe from fresh tomatoes if you’d like. Start with 3 pounds of ripe tomatoes (a variety tastes best), peel and remove their seeds, then chop and cook them down in a saucepan until soft.

Blending: I used an immersion blender to puree the ketchup right in the pan. If you’re using a standard kitchen blender, be sure you only fill your blender halfway and pop the insert out of the lid, then cover it with a towel, to avoid a big mess.

Refrigerating: This will keep for a week or more in your refrigerator in a tightly-sealed jar.

Freezing: This homemade ketchup recipe does not freeze well since it changes consistency and separates.

Canning: Ladle the ketchup into hot pint jars, wipe rims and cover with sterilized lids and rings. Process in a hot water bath covering the lids by 2″ for 20 minutes. Remove the jars from the water and set them on a towel on your kitchen counter. Let the jars cool overnight. Check seal before storing on the shelf for up to 2 years.

After experimenting with over a dozen ketchup recipes, including some ancient ones which didn’t include tomatoes at all, here is the recipe for homemade ketchup that I tweaked to my family’s satisfaction. It’s sweet and tangy, and we’re quite happy with it.

USING FRESH TOMATOES: Peel 3 lbs. of tomatoes. Remove seeds and chop. Cook in a saucepan and stir often until softened. Measure 30 oz. of cooked tomatoes with juice and proceed with the recipe. CANNING: Process in a hot water bath for 20 minutes.

Easy Baked Omelet for a Crowd