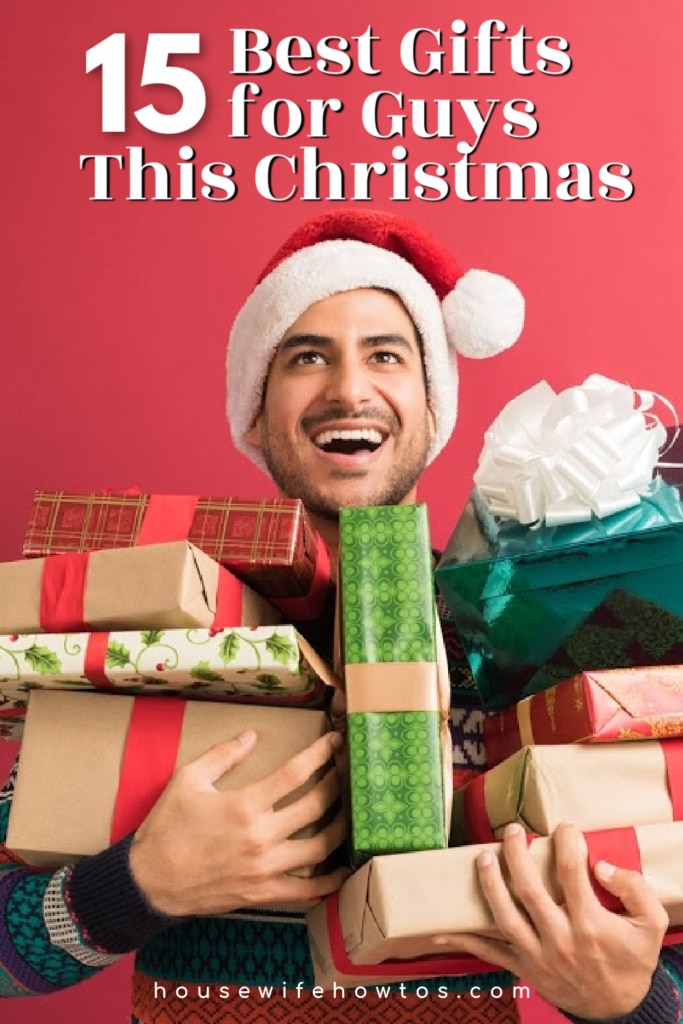 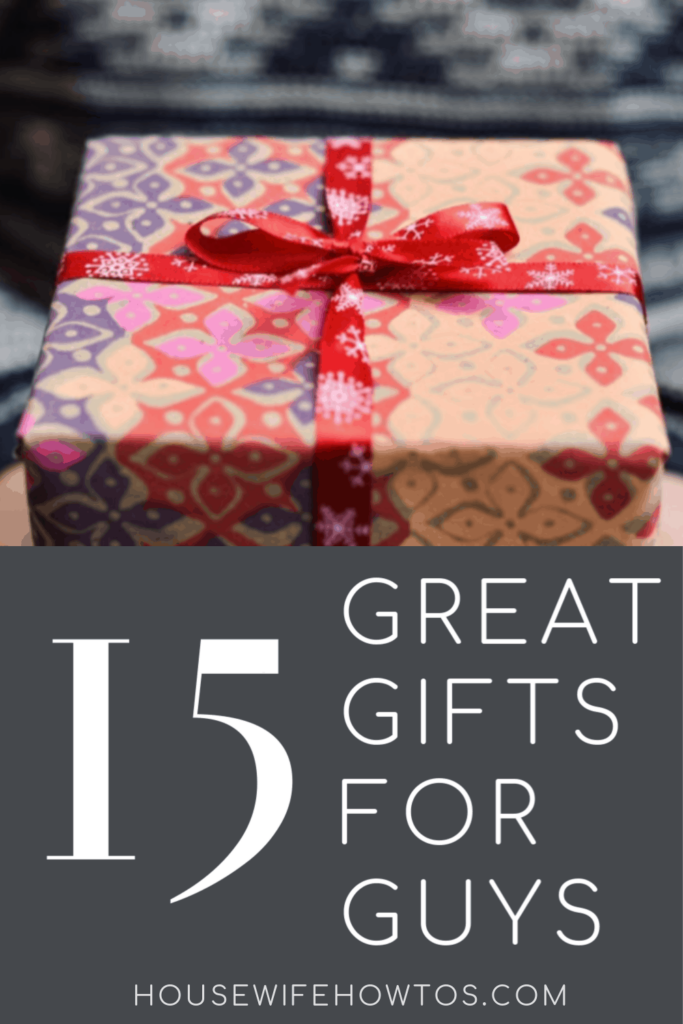 Are you looking for great gifts for guys? It’s not easy finding the right Christmas present for a man. I surveyed dozens of them to ask what gifts they loved receiving the most and used their answers to put together this list. So this year, you can feel confident you’ll give him something he’ll love for years to come.

Take the average guy shopping, and he’ll keep his head down in the mall, praying to get through the experience without losing his temper. Women, on the other hand, will stop at window displays and point to something, then say, “Oh, I love that.” Boom, the man gets an idea of what she likes.

Shopping for Men is Hard!

I know I’m not alone when it comes to finding thoughtful gifts for men. My girlfriends are all equally frustrated this time of year. More than one has asked: “Why won’t he just tell me what he wants?!”

(I half-jokingly suggested this is a man’s way of getting us back for the other 364 days out of the year. That joke was not well-received.)

Earlier this month, I sent an email blast to male friends asking them to tell me about their favorite Christmas present from the past five years. I wanted suggestions that they liked. At the same time, I didn’t want them to think I was asking what they’d like as a gift because that would’ve only led to the same response that drives women crazy: “Oh, anything is fine.”

Women know better! We have closets full of presents bought because “anything is fine” — yet those things have never been worn, watched, read, used, or otherwise touched. We have proof that anything is not fine.

So, thanks to the responses I got to my email blast, here’s a shopping list for guys who just won’t come out and say what they want for Christmas. Use it wisely.

A fly-fishing fanatic raved about The Beeracuda bag, which carries 12 beers (or other canned beverages) and keeps them cold in an insulated shoulder-sling.

He says it frees up his hands when he’s hiking to his favorite fishing hole, so now he no longer has to haul a cooler in addition to all of his other gear.

A candy-addict was thrilled when his wife gave him a desktop dispenser to hold his favorite treats. (It actually showed up in more than one response to my questionnaire looking for great gifts for guys. Go figure.)

For a high-tech version, go with this motion-activated snack dispenser and a couple of bags of his favorite candy or nuts.

One man who does many projects around the house said he loved this laser tape measurer because it made so many tasks faster. With one-button operation, and the ability to measure in a continuous motion, he doesn’t have to climb ladders or ask for help to measure things.

As a bonus, he says, it keeps the cats entertained, too.

“Every time I wear this, I feel the need for speed!” said the man who received this Air Force men’s bomber jacket for Christmas.

The ribbed cuffs and hem keep the elements out, while the interior and exterior pockets hold plenty of stuff. And it’s made in the USA.

The man who raves about this 12-hour hand warmer says it’s something he would never have thought to get himself but is so glad his wife did.

Tucked into his pocket while watching football in the stands, or getting in some early-morning fishing, it keeps his hands warm without being bulky. It’s also easily refilled, so he doesn’t have to worry about it running out.

One man’s girlfriend noticed that he kept losing his keys, wallet, and sometimes even his phone because he’d toss them on the dresser, and they’d slide right off. The leather and suede valet tray holds it all — keys, wallet, change. It even provides a spot for him to charge his phone, so it’s ready to go in the morning when he is.

“She saw I had a problem and fixed it with this. I haven’t lost my stuff since,” he explained. (Identifying a problem and solving it was a recurring theme in the responses to my search for great gifts for guys.)

“I’m constantly asked about this thing, but I won’t let anyone else touch it!” said the man whose job requires him to take copious notes during meetings.

This reusable notebook lets him take notes during meetings, scan them into his computer with a free phone app, then convert them to searchable text, which he can edit. Once that’s done, he wipes the page with a damp cloth, and, presto, it’s ready to be used again! (Update: A friend gave me one of these, and I use it all the time. It’s amazing!)

This leather travel bag features a vintage Dopp kit design and an easy-to-clean vinyl interior that one frequent-flier raves about. “Before, I’d just throw my stuff in a plastic bag when traveling. Now I feel like an adult.”

Plus, it comes with reusable travel-sized toiletry bottles, so he can tote his favorite stuff in a carry-on.

“I’d never buy myself slippers, but these are really comfortable, and they look cool, too,” said the man who received indoor slippers featuring his favorite team. (They come in women’s sizes, too!)

“I don’t like my beard to look scraggly, but I learned the hard way not to borrow my fiance’s scissors to trim it,” said one man.

With the beard and manscaping set that she gave him, his beard looks great, and her sewing scissors are off-limits again.

11. The Man Who Likes Smelling Manly

According to the guy who received it from his wife, this was supposed to be a gag gift, but it has turned out to be a favorite that she now gives him for birthdays and Christmas, too.

He’d been secretly using her expensive exfoliant and moisturizer but denying it (as if she wouldn’t know?) until she gave him this grooming set. They both love the way the manly soap, hand lotion, and shave gel smell.

“I look like I know what I’m doing thanks to these,” said one man who admits that he spends more time in the sand trap than on the green.

These padded, waterproof golf club covers pamper his set while he’s on the course and also keep them from scratching up his car on his way home. They even stay put when he gets mad and throws his club on the ground, he says. “Not that I do that.”

It comes with everything needed to make 2 gallons of beer in just 30 minutes — even the bottles — and there’s no need for a large brewing pot, either.

“This is my favorite toy!” said the Star Wars enthusiast of this Millennium Falcon Drone, which lights up and makes noises. Constructed of impact-resistant foam core, it survived light crashes while he learned to use the intuitive remote control.

It’s also his favorite way to get the dogs running around in the backyard without having to get off of his seat, he says.

The 4K Fire TV Stick with Alexa Voice Control won rave reviews from the man who’d ditched cable in his efforts to get his budget under control.

With this, he can stream from Netflix, ESPN, Hulu, Amazon Prime, and more. The Alexa voice control saves time searching, too. (I have one and love it, too!)

Comments are moderated. It may take up to 72 hours for moderated comments to appear. I welcome and encourage questions and discussion. However, I will not approve comments that are off-topic, repetitive, or contain hateful or threatening language, advertising or spam. Comments asking for information already covered in the article will not be approved.